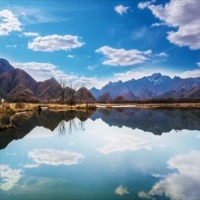 From the end of the Indosinian Movement to the beginning of the Yanshan Movement, the Shennongjia forest area experienced strong folds and large-scale tilting, which established the geomorphological framework of the area. The cold and warm changes of the Quaternary climate have left glacial landforms in some areas, resulting in complex and diverse landforms in the area. The Shennongjia Mountains are located in the southwest of the Shennongjia forest area in an east-west direction. The Shennong Peak is the highest with an elevation of 3105.4 meters, which is also the highest point in Central China. Meter. According to the geomorphological features and genetic types in the area, it can be divided into four types of geomorphic units: tectonic dissolution landform, dissolution erosion landform, denudation erosion landform, and accumulation landform.

Shennongjia belongs to the north subtropical monsoon climate zone, which is a transition zone from subtropical climate to temperate climate. It is humid and rainy in summer and mild and drier in winter. The annual radiation is 103.7 kcal/square meter, and the annual sunshine hours are 1858.3 hours. The sunshine hours and total radiation decrease with the increase of altitude, and the annual average temperature of frost-free period varies greatly due to different altitudes. The annual precipitation is between 800-2500 mm, and the precipitation increases with the increase of altitude. Frost often occurs at the turn of spring and summer, generally from the end of September to the end of April of the following year. The average annual evaporation in the area is 500-800 mm, and the drought index is 0.50-0.53. Southeast winds prevail 80% of the year.